The Washington Gold Exchange BLOG is an extension of the newsletter we began mailing to readers in 1974. Before the existence of the internet, the Rhyne Report was ‘snail-mailed’ for twenty-three years.

Craig Rhyne offers personalized service with privacy & competitive prices. Call for current quotes or if you have any questions: (206) 719-6368 or Email:  craig@washingtongoldexchange.com

Take delivery of  PHYSICAL silver and gold. Call to discuss Model Precious Metals Portfolios or for suggestions to customize your portfolio.

Craig Rhyne began trading gold and silver coins in 1970 (the year before the dollar was de-linked from gold). After reading Dr. Harry Browne’s book How You Can Profit from the Coming Devaluation (published in 1970), he believed the dollar was about to plummet against gold. And it did.

At that time, it was possible for Americans to purchase U.S. 90% silver dollars and pre-1965 dimes, quarters, halves; and gold coins such as old Austrian 100 Coronas, Mexican 50 Pesos, and British Sovereigns (below). 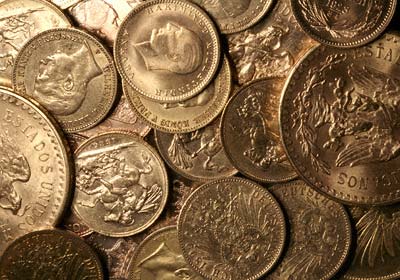 On Aug. 15, 1974, President Ford signed a law to make the ownership of gold bullion legal in the U.S. (for the first time since 1933). That was the year Rhyne began publishing a newsletter about the debasement of the dollar and how people could protect their savings by owning precious metals.

The Rhyne Report was one of the first newsletters of its kind to reach a nationwide audience with articles and interviews about PHYSICAL gold and silver, “hard” currencies (such as the Swiss franc), numismatic coins, fine jewelry, and the economy. (Image on the right by John Roberts.)

Private and personalized service are hallmarks of Washington Gold Exchange. We would be pleased to answer your questions or make suggestions for your customized portfolio.

CONTROL YOUR OWN PORTFOLIO INSURANCE:
http://www.youshouldbuygold.com/control-your-own-portfolio-insurance/

WHAT ARE CAPITAL CONTROLS?
http://www.youshouldbuygold.com/what-are-capital-controls/

For 180 years, the dollar was “as good as gold.” From 1792 (under President George Washington) the dollar was 100% convertible to gold in foreign exchange. On Aug. 15, 1971, gold-backing was removed from the dollar (the decision was called the “NIXON SHOCK”). Suddenly, the dollar was backed by nothing tangible.

Save SILVER dollars, not PAPER dollars. A DOLLAR “RE-SET” IS COMING.

Soon, the dollar will “not be worth a Continental.” Since 1971, the dollar has fallen more than 3,400% against gold (it now takes more than 34 times as many dollars to buy the same gold coin).

Mailing Address: P.O. Box 368, Bellevue, WA 98009.
Feel free to copy articles as long as credit is given
to www.WashingtonGoldExchange.com/ or
http://www.YouShouldBuyGold.com/.